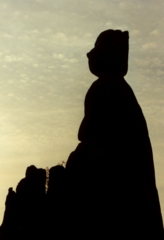 I have written about personae before and the more I think about it, the more I'm convinced that the model fits well. But the "Virtual Personality" concept does not.

One of the most important statements of the model is that a user is an entity in the "real" world, while computers operate in the distinct "virtual" world. Computers have no direct "touch" with users, they may only describe them using data records (personae or "virtual personas").

Some time after the informal drafting of the project I've realized, that the relation between persona and physical subject (person) may not be that important as it is currently seen. And it even might not be possible to reliably determine it in practice. As I've written earlier, maybe we should really forget about the entire "physical identity" concept - as it is intangible in the virtual world of computer software.

The only "identity" thing that can be processed in the virtual world is relations between personae. Especialy the relation that I call analogy, that indicates that the personae describe the same subject (whoever that subject may be). Maybe that would be sufficient to describe the "digital identity" situation. But the model is still work in progress, needs more thinking and more work ...