This diagram can be found in almost any marketing document dealing with integration problems. It illustrates a concept that is known as hub and spoke. The difficult O(n2) problem of full mesh is reduced to a simpler O(n) problem by introducing a central hub. That's what the marketing guys say (although they don't usually use the O() notation). 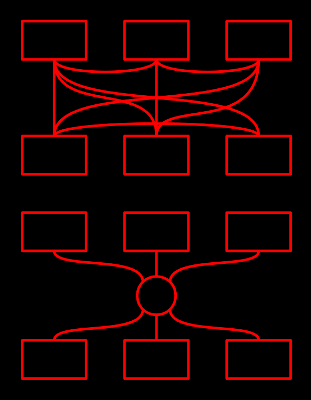 What the marketing guys don't say is that this approach usually does not work. The most hubs are just simple message routers. This does not simplify anything. The hub just passes the message from sender to receiver. Oh yes, the hub may use abstract addresses instead of concrete ones, but that's yet another indirection thing that can be easily done without hub. Oh yes, the hub may do some basic protocol adaptation, but a well-chosen data representation library will do essentially the same thing. That won't justify the cost of the hub. And what's really the cost? Except for pretty big pile of money to pay there is an impact on systemic qualities. The hub is inherently a single point of failure. The hub introduces latencies. Hub can cause additional problems as it is yet another moving part in the system. And the communication with the hub is making the code more difficult to understand (just have a look at JMS).

This is a typical anti-pattern for many SOA-motivated deployments. Enterprise Service Bus (ESB) is usually the first component that gets deployed in SOA initiative. But it initially brings no substantial benefit, as there are no services to put on the bus. And if there are services, they are not independent and definitely not idempotent. Such services just cannot be efficiently reused in any other way that it was before the hub came into a play. In fact, the ESB should be among the last components that get deployed in SOA initiative, not the first. SOA is about the services, not about the bus.

Yet, there are few cases when the hub-and-spoke approach works:

Yet, most of these are very difficult to do right. And if done wrong, they may bring much more pain than benefits. Handle with care. The hub is a dragon egg and the spikes are venomous snakes.